Words of Wisdom is a 2003 slice of life brickfilm by Chris Salt. It follows the story of Mike, who is making a stop-motion movie. It was an entry to the Words of Wisdom Contest on Brickfilms.com, winning the prize for the Best Theme category and placing second overall.[1]

Following a couple of complaints that the film wasn't "clean" due to the appearance of the naked Rod Sterling, a second version of the film was released that removed Sterling's scene, even though Salt objected to the notion that a yellow plastic figure made his film "dirty".[2]

Mike quietly works on his stop-motion film. Geoff walks in and asks about Mike's activities. Mike explains that he's making a stop-motion film, and it will probably take a while to make. Geoff leaves and Mike continues working. Eventually Mike's other roommate Rod walks in, nude and carrying a paddle and an oil can. Rod quickly excuses himself.

Hours pass, and Geoff returns, suggesting that Mike do something "more productive." Mike shows Geoff his nearly-finished film, which consists of one guy throwing something at another guy and then falling over. Geoff says Mike should get a life, then leaves. The film ends with a quote by Bertrand Russell: "Time you enjoy wasting is not wasted time."[3] 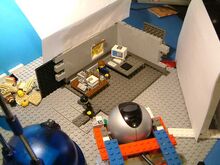 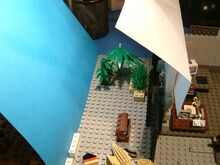 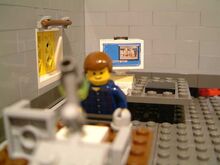 "I meant to focus on the computer screen. Honest." 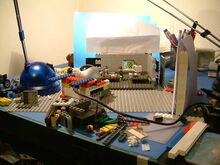 "The view from the director's chair" 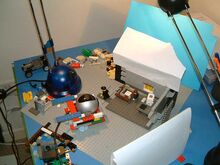 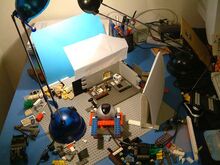 "The bird's eye view"
Add a photo to this gallery

Retrieved from "https://brickfilms.fandom.com/wiki/Words_of_Wisdom?oldid=37992"
Community content is available under CC-BY-SA unless otherwise noted.