Vecna's Lens: Part I (also known as Dungeon Crawl: Part I)[1] is a 2001 fantasy brickfilm by Jason Rowoldt. It is the only released part of what was planned to be a brickfilm exceeding an hour in length.[2] Rowoldt also mentioned having filmed 20 more minutes of footage that never got edited or released.[3][4] The film originally entered production in late 2000.[5][6]

A visitor arrives in the dockside town of Dalewind and enters The Lucky Pirate bar. After making his way past combative pirate patrons, he is invited to sit with a more friendly stranger. The visitor mentions that he is in town to try to sell his crops, and his new friend explains that himself and his companions are taking refuge from pursuers, finding security in the company of violent pirates. He begins to explain how he got in this predicament.

In Gordsville, an incarcerated thief named Slim is brought before a crowd to be hanged in the town square. The ceremony is interrupted by the appearance of a dragon, which the guards go to fight. Slim seizes the opportunity to make his escape and reunite with his partner in crime, and the pair leave on horseback. The dragon vanishes, and Slim's partner explains that she had solicited an illusionist to create the distraction. The duo arrive at a meeting place but are attacked by a monstrous Owlbear which they fight and defeat, but not before it slays their horses.[2] 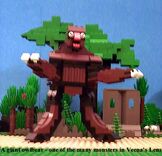 Retrieved from "https://brickfilms.fandom.com/wiki/Vecna%27s_Lens:_Part_I?oldid=32465"
Community content is available under CC-BY-SA unless otherwise noted.