Brickfilms Wiki
Register
Don't have an account?
Sign In
Advertisement
in: Brickfilms directed by Jay Silver, 2001 brickfilms, Brickfilms without dialogue,
and 15 more

The Gauntlet is a 2001 fantasy action brickfilm by Jay Silver. It follows the story of a prisoner who goes through great trials to escape his prison.[1] It is set to "In the Hall of the Mountain King" composed by Edvard Grieg, and it was originally conceived for the Classical Movie Contest on Brickfilms.com but was not finished in time for the deadline.[2] It was the first brickfilm publicly released by Jay Silver, who had been occasionally dabbling with brickfilming in prior years.

The Gauntlet is regarded as a classic in brickfilming,[3][4] and is viewed as having greatly exceeded the standards and pushed the boundaries of its time,[5][6] in areas such as production design, shot composition, cinematography, and narrative structure.

Deep in a mountain, a prisoner is held in a pit with a chained hatch. With great effort, the man breaks the chain and frees himself, panting, from the pit. The man exits the room and begins to explore the prison, trying to find a way to escape.

A wizard, unbeknownst to the man, observes the escapee. The wizard uses a crystal ball to bring a giant golem to life. The golem chases the man, who desperately tries to escape. The man barely avoids falling debris and leaves through heavy oak doors. The golem pounds on the door but can't break through. The man, free, runs away into the wilderness, and the wizard slams his fist down angrily. 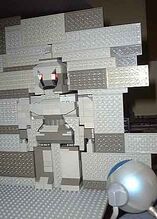 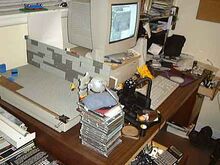 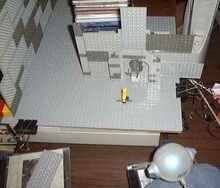