That Groovy Kind o' Love is a 2010 comedy brickfilm by Jason Boyle.[1] It is about a witch who tries various methods to get a barman to fall in love with her.[2] It was the last brickfilm released by Jason Boyle.[3]

As two witches fly on broomsticks, the young witch Lina's hat falls off and lands outside a bar. Lina lands to retrieve it, and through a window she sees the barman, whom she falls for. The older witch discourages this infatuation, but Lina plans to devise a love potion. She gathers ingredients and mixes up a potion before returning to the bar. She pours the potion in the barman's cup, but a nearby bearded man drinks from the cup and immediately falls madly in love with Lina, chasing her out of the bar.

Lina checks her spell book and tries out a love spell, making a cat and mouse fall in love. She takes the book with her back to the bar and casts a spell to summon Cupid. However, Cupid sees a bottle of alcohol which he grabs and flies away with. Lina tries to cast spells, but just ends up causing transformations in the patrons and summoning various things. Demons are summoned and a fight breaks out, so Lina makes a hasty exit. The Spirit Stompers arrive to take care of things.

The barman finds a broomstick left behind, and reads Lina's name and number on it. He phones her to let her know he has it. She comes back to the bar and sits down with the barman, where they hit it off. The older witch arrives to try to take Lina away, but the bearded man, still under the influence, falls in love with the older witch and chases her outside, leaving Lina and the barman together.[2]

References to other brickfilms

Jason Boyle had released a Halloween brickfilm for every year he had been animating. Realizing That Groovy Kind o' Love would likely be his last due to college, he included references to his previous Halloween films in it: 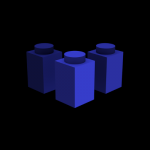