Brickfilms Wiki
Register
Don't have an account?
Sign In
Advertisement
in: Brickfilms directed by Chris Salt, 2010 brickfilms, Brickfilms without dialogue,
and 6 more

Printed Circuit - Brick It is a 2010 music video brickfilm by Chris Salt.[1] It is the official music video to the song it is set to.[2][3] The video follows a man leading an unfulfilling life, who learns of a nearby live show.[4] The video was featured on The Brothers Brick, and it was on the shortlist for the cancelled 2010 Bricks in Motion Awards. Printed Circuit sold t-shirts featuring the "Coffee Hole" logo Salt designed for the film.[5]

The video follows a man who lethargically struggles through the daily grind, waking up early, travelling to his menial fast food job, and getting chewed out by the boss. When he gets home that evening, he idly flips between TV channels and web pages, until he learns of a Printed Circuit live show taking place in a nearby club that night. He heads out to the show where he begins to become enthralled by the music, eventually jumping up and down along with the rest of the crowd. He arrives home late that night, tired but finally happy.[4] 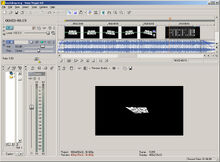 "Backdrop: I have a plan for a shot in my next film. If this works the way it works in my head, it'll look amazing.

These things rarely work the way they work in my head."

"Rock lighting tests: Got me some LifeLites and some coloured gels." 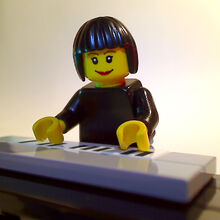 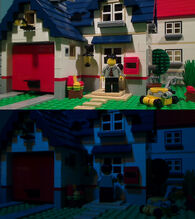 "Shooting day for night: Switch off one light, cover the other with a blue gel, and presto! It's night time." 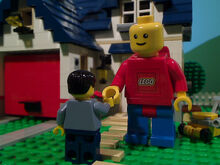 "Set visit: Torchy dropped by to meet the cast."

"Steamy shower scene: The shower effect is dead easy to mock up in Photoshop but will probably take ages to animate properly."

"Timeline Day 1: The timeline at the end of day 1 of "principal photography". Thirteen seconds out of two hundred and forty." 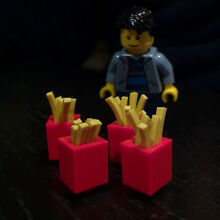 "You want fries with that?: I'm far more pleased with this than a man my age ought to be."

"Timeline Day 2: Not bad going considering I got to about 4pm without shooting a single frame today. Forty seconds in total. I don't think I'm going to be finished by Friday."

"The hat shop: I spent all day building a stupid street scene for one shot. I fitted out a hat shop with lots of lovely hats, delightfully arranged.

Then I started filming and realised I'd made a stupid mistake and couldn't do what I'd planned. The hat shop is still there in the final shot but you can't see much of it."

"Coffee time: Test shot for a setup I was working on. I added the face as an afterthought."

"The wheels on the bus...: Another one of those shots that takes half a day to set up and an hour to shoot. It lasts 7 seconds."

"Timeline Day 5: I'm calling it day 5 because I took the day off yesterday to remind myself what the sun looks like. That's about 86 seconds there, so still less than half way.

The next film I make is going to be two guys in a room talking." 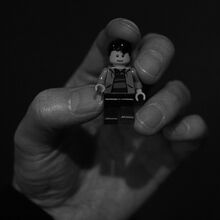 "Heath Robinson: The blue gel gives the "street" its night time look, and the tangled wires power the streetlights." 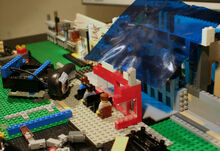 "... go round and round: A week after the last bus shoot, I realised I need to shoot the same bus journey going the other way.

Cue an hour or so of rebuilding everything based on that photo."

"Everyone's a critic: I shot a quick bit of footage of myself "dancing" today so I could get the timings right for the animation. My webcam obviously has certain standards though, because this is what the autofocus switched to as soon as I started throwing shapes."

"Gig: Too dark? I'm having trouble striking the right balance."

"And there was light: Better, I think.

I'll be filming this in a little while. It's going to take bloody ages because there are 22 animated crowd members jumping around in time with the music."

"On stage: Still shooting gig footage. It feels like this film is never going to be finished."

I might need to tweak the brightness of some of these night time shots. I really like the blues though."

"Damn fine: This still amuses me no end, even after spending a couple of hours masking the signs as the guy walks in front of them.

I'm thinking maybe the beans should be brown though."

"Surfin': Mockup of a set for yet another 3 second shot. This birdnoise.com webpage does actually have readable content. Once the film's done, I'll maybe upload it."

"birdnoise.com: I needed some fake websites that would be seen fleetingly in one shot that lasts about 3 seconds. So, obviously, I made actual pages with readable text and everything.

After making this page and comping it into the animation, I found out that some internet chancer has registered birdnoise.com so I've had to come up with an alternative."

"Strimmer: I needed some fake websites that would be seen fleetingly in one shot that lasts about 3 seconds. So, obviously, I made actual pages with readable text and everything.

This one is basically Pitchfork, and features more photos nicked off Pete Reid's photostream."

"YourPipe: I needed some fake websites that would be seen fleetingly in one shot that lasts about 3 seconds. So, obviously, I made actual pages with readable text and everything.

This one features the turtles nicked off Pete Reid's photostream and some other stuff from SpastikChuwawa's photostream."

"Why I'm not a designer: Can't work out what colour the cups in the logo should be. This green doesn't look right at all." 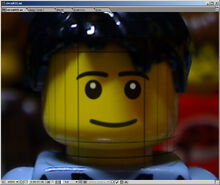 "Bastard: Oh sure, he looks like butter wouldn't melt, but it took me three attempts to get it to stop looking like his face was bouncing around on his head."

"For Pete: Pete had an awesome idea for this shot that I couldn't resist putting in."

"Assets: I made a bunch of signs and things for this film. This is a collection of some of them."

"Timeline Day I Don't Know What: Finished. I'm waiting on an audio mix but otherwise everything is finally done.

I think this has been about 3 months in the making, off and on. Overall, I'm pretty pleased with how it turned out but damn, I am not doing another film with this many scenery changes."