Pokéballin' 2 is a 2014 comedy brickfilm by Dylan Woodley.[1][2] It is a parody of the Pokémon video game series and anime, and it follows Ash as he has a Pokémon battle with another trainer.[3] It is the sequel to Pokéballin' from 2012.[4] It features use of multiple different scales of brick-built puppets for the characters.[5]

A Pokémon battle between Ash and another Pokémon trainer begins. The trainer has his Magmar use Fire Blast on Ash's Pikachu, which defeats Pikachu. Ash then opts to send out Electrode, who is eager to use one of his electricity attacks. Ash instead requests Self-Destruct, to the dismay of Electrode and the opponents. Electrode self-destructs, and a massive explosion engulfs the area.[3]

"Get ready for your closeup, guy."

"The forest comes together."

"Pikachu and all of his fiery friends."

"Notice the mechanism that wobbles the Pikachu semi-automatically."

"Disembodied limbs are the best kind."

"What is this mechanism?"

"A bunch of Pokeballin builds." 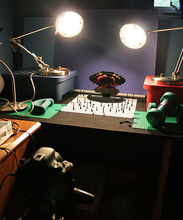 "Boom."
Add a photo to this gallery

Retrieved from "https://brickfilms.fandom.com/wiki/Pok%C3%A9ballin%27_2?oldid=34591"
Community content is available under CC-BY-SA unless otherwise noted.