Out of Time is a 2003 comedy science fiction brickfilm by Chris Salt. The story follows the duo of Mike and Geoff, who, out of boredom, go for a walk and encounter three time-travelling spacemen.[1] It is Chris Salt's "first full-length animated short." It was an influential film in the development of the dynamic duo brickfilm genre. Out of Time was created for the BricksWest 2003 Comedy Animation Competition, and later won the NWBrickCon 2003 Animation Competition.[2][3]

Friends Mike and Geoff are sitting at home on a quiet Sunday. Mike, bored, prods Geoff into going for a walk, who eventually gives in. While walking, they stumble upon a materializing time machine piloted by three spacemen, led by Major Tom Golightly. Having traveled from 1981, the spacemen are eager to learn about the technological advancements of the future. They are quite disappointed when Mike and Geoff informs them that teleporters, hovercars, and jetpacks haven't been invented yet. Just as they start to learn about reality TV, the spacemen are abducted, one by one, by feral monkeys. Mike and Geoff barely react and return home, where they debate what do to with their newly-acquired time machine.

References to other brickfilms[]

Several cameos and references to other brickfilms appear at the beginning of Out of Time. Namely, Nate Burr's characters Steve and Dave and scenes from Thomas Foote's The Big Match appear on Geoff's newspaper, and posters for Jay Silver's The Gauntlet and Rise of the Empire appear on the walls of the apartment. All cameos appeared with the permission of the original creators.[1]

Chris Salt was inspired to make Out of Time when he discovered his old collection of LEGO at his parent's house, which contained, among other things, the classic red, white and yellow spacemen from the Classic Space theme seen in Out of Time. This led to Chris thinking about the 1980s and how the new millennium hasn't quite lived up to the expectations of the last 20 years, and the BricksWest 2003 Animation Competition gave him a challenge to strive to win (which, ultimately, he didn't).[4] Still, Out of Time did win the NWBrickCon 2003 Animation Competition.[2]

Out of Time underwent a number of changes during production. In the original script, the spacemen were to be abducted by giant space mutants, but the action figure that was going to be used for the mutants was too large to fit in frame, so the space mutants were replaced by monkeys.[5] There was also dialogue recorded by Loïc Desjardins and Jeff Leary that did not end up in the film.[6]

Chris Salt intended to continue the story of Out of Time with further films. A teaser trailer was released for a film entitled Out of Time 2: Primate Suspect. 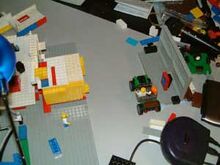 "Filming one of the cars driving past in the background. To the left is the living room set - the yellow box with the white top is the entrance hall. Note the pathetic attempt at creating the look of a building across the road - I knew it would be out of focus so I didn't make too much of an effort." 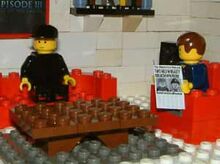 "My girlfriend has a Fuji F60-something digicam which takes absolutely stunning pictures. Unfortunately, I haven't been able to hook it up for stop motion animation. You can't really tell from the picture on the left - click on it to see the larger image." 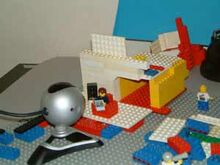 "Filming Mike's close-up from the last scene. You can see in this picture that I had to raise the whole living room set in order to get the right angle for the close-ups." 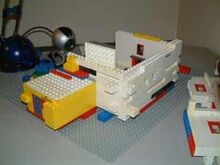 "This is what the living room looks like from behind." 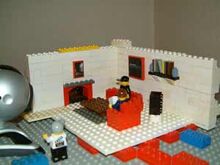 "The modular walls in action! I built the living room set as three separate walls which were held in place by the baseplate and a brick at the top to hold them together at the corners."