Mr. Bad Frame is a 2010 drama brickfilm by Loïc Fontaine-Boivin.[1][2][3] It follows a man who can only move at 3 frames per second, in a world where everyone else moves at 15 frames per second.[4] It was created for the Avant-Garde Contest on Bricks in Motion, and won second place.[5] It was also on the shortlist for the cancelled 2010 Bricks in Motion Awards.[6]

The film opens with narration explaining that in a world that moves at 15 frames per second, there a man by the name of Mr. Bad Frame who only moves at 3 frames per second. Due to this handicap he is ridiculed and mocked by the people of the town. One day as Mr. Bad Frame walks through the park he casts a coin into a fountain, wishing to be smooth like everyone else. As he walks home, Mr. Bad Frame is approached by a boy, who questions the way he moves. He explains that is how he was born, but worst of all he is good at nothing. The boys mother arrives and pulls him away telling him not to talk to "strange strangers". Continuing on his walk, Mr. Bad Frame is nearly hit by a car, but jumps out of the way just in time. As he regains his bearings on the sidewalk a Break-Dancer notices him and compliments his "choppy dance". The Break-Dancer then walks into a club and tells the people of the brand new talent he found, Mr. Bad Frame and his famous choppy dance. As Mr. Bad Frame performs his dance the crowd goes wild, cheering him on.

Five days later, Mr. Bad Frame returns to the park finally happy about who he is and his new found purpose. All of a sudden a magic flash of light is cast out of the fountain. Mr. Bad Frame's wish had come true and he now moves smooth like everyone else. He is immediately angry and upset, claiming he is no longer good at anything. Suddenly, an elevator drops from the sky. Hesitantly, Mr. Bad Frame rides it all the way to the top where he is confronted by his creator. Insulted by the lack of respect for granting the wish the creator punches Mr. Bad Frame back to Earth knocking him into the fountain. A bad lightning storm starts up and destroys the fountain, causing the coin to bounce out and the wish reverted. After the fountains destruction Mr. Bad Frame returns to his normal existence. Almost normal. 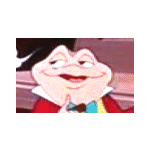