Lift-off! is a 1985 film by Marc Leidy. It is among the earliest known brickfilms created and is one of the first known amateur brickfilms to include sound and an original musical score.[1] It is the only known completed stop-motion brickfilm by Leidy and was first made publicly available in January 2000, making it one of the earliest brickfilms available online.[2][3] A higher quality transfer was made available in 2014.[4]

Lift-off! later got Leidy the chance to work as a designer on the video game LEGO Alpha Team, which was released in 2000. Leidy created the original design of the character Tee Vee for the game, and this character design was included in the 2001 LEGO set 6775 Alpha Team Bomb Squad.

In 2000, Leidy was working on a CG brickfilm, Night of the Plastic, but this appears to have never been finished.[5] Leidy released two brief CG brickfilms, We’re going to need a bigger wallet and Supermoon!, in September 2015, giving him one of the widest spans of brickfilming activity, at 30 years. He passed away in October 2015.

A man gets fuel put in his car and drives towards a space station. Upon arrival, he puts on an space suit and gets in to a spaceship. After a countdown, the ship takes off and flies in to space.

Lift-off! was shot over a couple of weeks in 1985 on Super 8 film using a Canon Auto Zoom 814E camera. It was animated at 9 frames-per-second. The original film reel was lost but the film survived on a Betacam SP tape transfer.

Leidy composed the soundtrack to the film himself using an Atari 800 home computer. He received help with additional sound effects from his friend Jon Mueller, whose moped can be heard as the sound of the main character's car.[6] 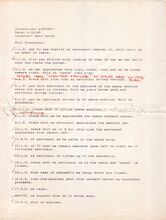 "My original shot list, printed on an Okidata Microline 92 dot-matrix printer. To hear what that printer sounds like, check out The Museum of Endangered Sounds." 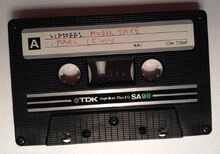 "I composed the music on an Atari 800. Jon Mueller, a high school friend, pitched in with sound effects. We ran his moped in his garage for the car sounds, working out the action beats ahead of time so we would know when to rev the engine. For spaceship sounds, we made whooshing sounds into a microphone. Everything was played back live in Jon’s bedroom, through a mixer connected to a boom box. We covered my dad’s Super 8 projector in a big box and blankets to muffle the whirring motor sound." 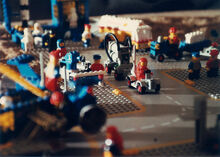 "I shot “Liftoff!” in Woodcliff Lake, New Jersey, on my parents dining room table. Filming took a few weeks. I built a camera dolly out of parts from an Erector set, and used my articulated desk lamp for lighting." 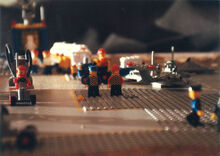 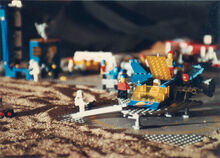 "A view of the Space Cruiser, with the Alpha-1 Rocket Base in the background." 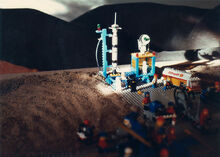 "From this high angle view, you can see the edge of the sand. I used black soft foam draped over the dining room chairs for the mountain ranges." 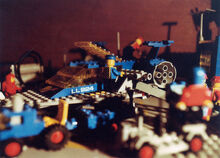 Retrieved from "https://brickfilms.fandom.com/wiki/Lift-off!?oldid=38534"
Community content is available under CC-BY-SA unless otherwise noted.