Knucklehead is a 2010 music video brickfilm by Chris Salt.[1] It is set to the song of the same name by the band Fight Like Apes, and follows a loose story about a group of Power Miners.[2] It was created in part to practice digital mouth and face animation, which features prominently throughout the film.[3][4] It was on the shortlist for the cancelled 2010 Bricks in Motion Awards.

"Deep, deep down: Checking angles for the new film. I've got a lot of cave to build for this one." 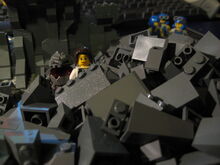 ""Sorting": It takes an awful lot of grey slopes to make a cave."

"Long shot focus test: I'm doing the old Dr Who trick of having 6 pieces of cave "furniture" and changing angles and moving them around for each shot. Hopefully, it won't just look like a muddy grey blur on youtube."

"Those darn miners!: Always up to no good." 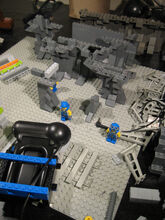 "Making caves: This is what the mine tunnels look like from above." 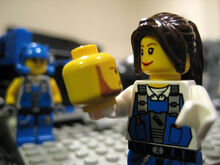 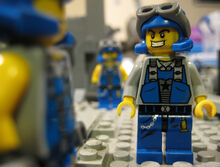 "Miner Dane: Kicking back in a break between shots." 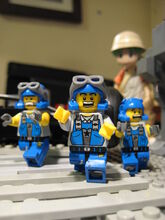 "Yotsuba!: The boys run from a terrible giant." 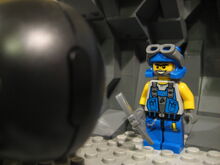 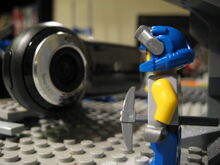 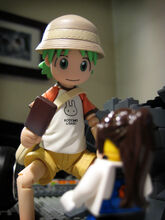 "Set visit: Yotsuba is meeting the cast and crew" 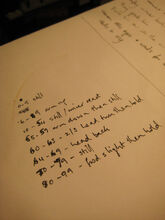 "Notes from a disorganised mind: This is how I time things. I listen to a piece of audio, mime out roughly what I think the characters should do, then work out exactly what frame those things should happen in. Real animators have a formal system for doing that. Me, I scribble numbers and cryptic notes. And then usually go off track within ten frames anyway. Hence the scribbled out numbers all over the place.

My camera's white balance went all wonky for this and sepia toned the paper for me. It's actually white, with a lovely coffee ring. I'm not complaining though." 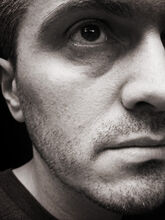 "Day four: The life of a bedroom animator is not a healthy one, I sometimes think." 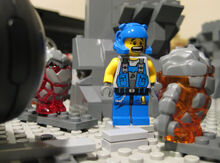 "It wasn't a rock...: ...it was a rock monster! Two rock monsters, in fact. Miner Darren's day just keeps getting worse.

Everyone is up on plates so I could move the rock monsters in at the right angle. I'm getting tired of animating rock monsters now."

"*Goose*: This is not an actual still from the film, although it's not far off. I was just lining up a shot." 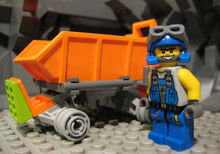 "The little mining cart that wasn't: This was going to feature in the latter part of the film until I realised how huge it is in the frame. I don't have enough tunnel walls." 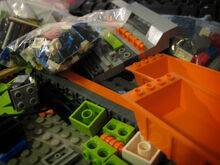 "Day six: I'm not very good at putting things away when I've finished with them." 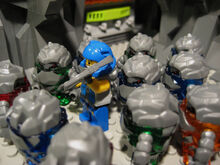 "A face in the crowd: Blocking out a shot from near the end. It's going to be fun animating all those rock monsters." 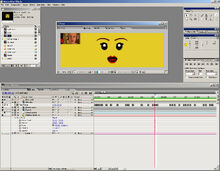 "How I spend my weekends: Animating to video of myself lipsynching to a pop song."

"Not a good sign: This is how VLC Player thinks my test footage should look. VLC Player is wrong."

"Faces: Just a small selection of the 21 mouth shapes I've made for this film."

"Sigh.: Turns out there are shortcut keys in AfterEffects that change the values of all keyframes in a composition." 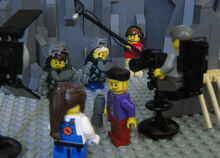 "Behind the scenes: A break in shooting on the Knucklehead set, as captured by Pete "Legoloverman" Reid"