Journey to the Moon

En Rejse til Månen (Journey to the Moon)

En Rejse til Månen, or Journey to the Moon in English,[1] is a 1973 brickfilm by cousins Lars and Henrik Hassing about a journey into space. It is considered to be the earliest known example of a brickfilm.[2]

Astronauts head to the Legoland Aeronautics & Space Administration, and are brought to a rocket. The rocket takes off and enters space. As it approaches the moon, a lunar lander ejects and lands on the moon. The astronauts exit the lander and plant a flag before exploring in a moon buggy. They return to the lander and take off to get back to the rocket. They return to earth and land in the ocean, where they are picked up by a helicopter. The helicopter takes them to a ferry, and two days later they arrive back to their home town.

The film was created using a Super 8 camera for the golden wedding anniversary of the Hassing cousins' grandparents and while mostly stop motion animation the film does contain some scenes with movement created with a fishing line.

The film was shown to then-current head of The LEGO Group, Godtfred Kirk Christiansen, who liked the film and awarded the Hassings with a tour of the LEGO factory and some large LEGO sets. 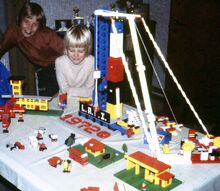 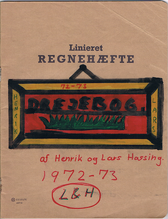 Front page of the storyboard. 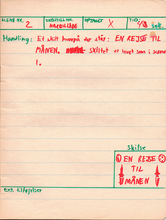 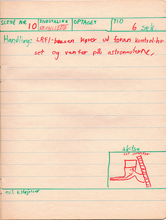 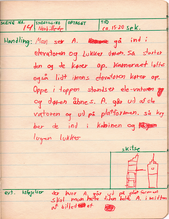 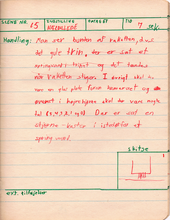 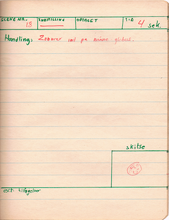 Lars is playing with Moon and Earth while Henrik is building the air craft carrier. On the shelf you can see the paper sign (rolled) saying "EN REJSE TIL MÅNEN". Behind the camera is the living room where the wives of the astronauts watch the TV transmission of their return.

The city and landscape on top of a table tennis (ping pong) table. Lars with the camera, Henrik at the launch site holding the 500W lamp and Inger painting the sea

Henrik filming at the moon landscape, Lars is holding the lunar module.

Golden wedding anniversary, our grandparents and six grandchildren at the front door where neighbors had set up a port of honor.