Immortal is a 2014 brickfilm by Dominik Girod and Markus Engel.[1][2] It follows an alchemist attempting to achieve eternal life, who makes a deal with the devil.[3] It takes inspiration from the play Faust by Johann Wolfgang von Goethe.[4] It was created for Steinerei 2014, where it won the Brickfilmer Prize. It was the first brickfilm co-directed by its creators.

"Storage room in the train" 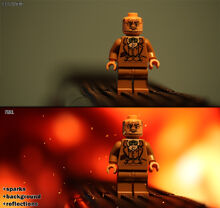 "Building the scenery in Hell"