Hunted is a 2014 Star Wars horror brickfilm by Beaton Films, directed and animated by Eric Beaton.[1] It follows a Scout Trooper and Storm Trooper who have an encounter in a wooded area.[2] It features set design created with clay and other hobby materials, rather than LEGO. 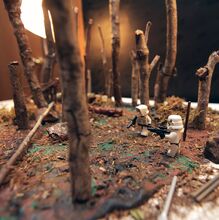 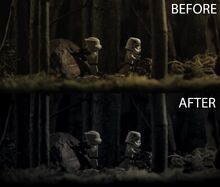 Retrieved from "https://brickfilms.fandom.com/wiki/Hunted?oldid=40749"
Community content is available under CC-BY-SA unless otherwise noted.