Great Inventors Part 2 is a 2003 historical comedy brickfilm by Stefan van Zwam.[1] It is the sequel to Great Inventors Part 1: The Wheel and is about the cavemen discovering fire. It was an entry to the Words of Wisdom Contest on Brickfilms.com and was presented with the award for Best Presentation.[2]

An elephant drinks from a lake when a spear lands in front of its head. The elephant runs away and a caveman comes to collect the spear, annoyed that he missed his shot. He chases after the elephant but trips over another caveman. The two begin to talk and decide that they must find shelter from the cold, so they venture up a snowy mountain to a cave.

Upon entering the cave, an animal chases the cavemen out and they fall down the mountain into a pile of snow. A rock bounces off one of their heads, which gives him an idea. After gathering a pile of wood, the cavemen scrape two rocks together until they create a spark. The wood ignites into flames and the cavemen cheer at their new discovery. They begin to warm themselves on the fire, but one accidentally sets his butt alight and runs to sit in the snow. The film ends on the Dutch proverb, "Who burns his buttocks must sit on the blisters."[3]

Great Inventors Part 2 placed fourth overall in the Words of Wisdom Contest and was announced as the winner of the Best Presentation category, despite Zero Gravity Rebellion by James Maduzia receiving marginally more points in this category. This was due to Zero Gravity Rebellion having already won Best Overall Film, which disqualified it from winning any further categories under contest rules.[4] 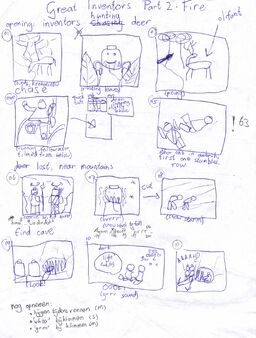 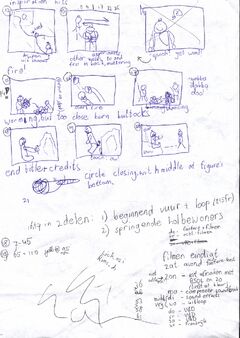 Retrieved from "https://brickfilms.fandom.com/wiki/Great_Inventors_Part_2?oldid=41128"
Community content is available under CC-BY-SA unless otherwise noted.