Doctor Who: The Celestial Toyshop is a 2003 brickfilm by Chris Salt, based on Doctor Who.[1] It follows The Doctor making a purchase in a shop.[2] It was created to honour the occasion of the 40th anniversary of Doctor Who, and its punchline is a play on words referencing a line from the show following The Doctor's regeneration into the sixth Doctor.[3]

At a shop named Traxill's Temporal Supplies, the TARDIS materialises outside. The Doctor and his companion step out and enter the shop. The Doctor tells the shopkeeper that he is looking for a time-space nebuliser, and the shopkeeper fetches this item. He tells The Doctor it will be 45 galactic space credits, and The Doctor hands over money.

The Doctor waits at the counter, until he informs the shopkeeper that he gave him 50 galactic space credits. The shopkeeper hands back 5 credits, and The Doctor leaves. Once outside, The Doctor shows the credits to his companion before exclaiming "Change, my dear, and not a moment too soon".[2]

Behind the scenes[edit | edit source]

The main shot of the film was deliberately set up so as to clearly display what each character was doing. To achieve this, The Doctor and the shopkeeper were placed offset from each other and are further apart than they actually appear on screen. This posed a problem when it came time for them to hand items between each other, an issue which had not been considered until the filming of the lengthy shot was already well underway. To avoid having to start the filming over, forced perspective was utilised by removing The Doctor's hand from the socket and moving it quite far across the counter to grab the item, which appears much more seamless on screen than how it actually looked behind the scenes.[4] 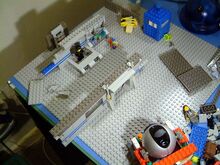 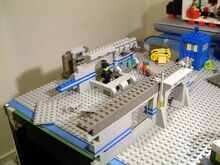 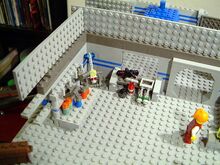 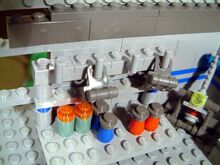 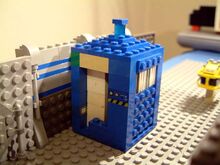 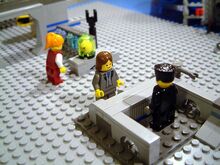 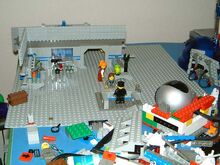 Retrieved from "https://brickfilms.fandom.com/wiki/Doctor_Who:_The_Celestial_Toyshop?oldid=31172"
Community content is available under CC-BY-SA unless otherwise noted.