Brickfilms Wiki
Register
Don't have an account?
Sign In
Advertisement
in: 2000 brickfilms, English-language brickfilms, Brickfilms produced for The LEGO Group,
and 7 more

Dino Cop is a 2000 comedy action brickfilm commissioned by The LEGO Group. It is about a cop who gets turned into a dinosaur in a laboratory accident.[1] It was created to promote the LEGO Studios filmmaking kit and was originally available on the Studios website.[2][3] It was not included on the CD that came with the main LEGO Studios set. It was not created with the LEGO Studios camera, and came with the disclaimer "Made to inspire with a professional camera".[4]

Footage from Dino Cop was also used for a TV commercial for LEGO Studios, in which children are seen working on the film and the director "Phil Maker" explains the premise.[5] There was also a trailer for Dino Cop played exclusively in theaters, as part of the commercials before the coming attractions.[6]

In the middle of nowhere, Johnny Thunder and Pippin Reed are in The Temple of Gloom and have found a vial of dinosaur DNA. As they pick it up, the temple begins to collapse, and they run out. They escape with the vial and take it to Professor Genome's research lab. Lieutenant Ty Rex arrives to guard the vial and make sure nothing happens to it. Once he is alone in the lab, an earthquake begins. Rex picks up the vial of DNA to try to keep it from harm but the lab collapses on top of him, spilling the DNA on him.

Professor Genome finds his lab destroyed, and wonders what happened to Lieutenant Rex. At that moment, Rex, who has now become a dinosaur, bursts out of the rubble, and says they can call him Dino Cop. Dino Cop begins to patrol the town and spots Guy Meanie's gang, so begins to eavesdrop on them. They discuss their plan to rob the city gold reserves while the police are busy dealing with the earthquake. At the reserves, they enter the safe and begin packing up the gold, but Dino Cop interrupts. The gang flee back to their car and try to drive away, but Dino Cop steps on the car to stop it, and takes the gang to prison.[1] 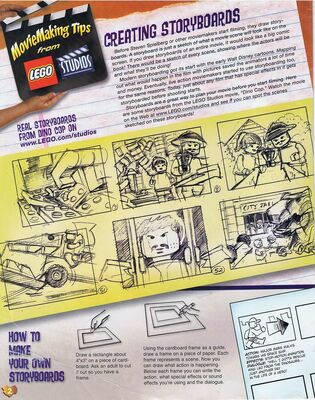