Darren Hayman - My Dream Train is a 2011 music video brickfilm by Chris Salt.[1] It is the official music video to a song by Darren Hayman, which was created as part of a project by Hayman to write, record and release one song every day in the month of January 2011.[2] While filming the video in the second half of January 2011, the only information Chris Salt had to work with was that it should feature trains and that the song would be at 90 beats per minute. He received the song at 1PM on January 31, and edited the video and created the lip sync until shortly before midnight that night.[3][4]

When Darren Hayman planned to release a limited CD/DVD set of his January Songs project, Chris Salt took the opportunity to create a director's cut of the My Dream Train video, tightening up the editing and visual effects.[5] 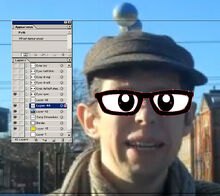 "Making Darren: I am hopeless at art so it takes me a very long time to draw minifig faces. Even longer when I'm trying to make them look like an actual person."

"Train Tests: I've borrowed an Emerald Night for this film. It's bloody huge. It's going to take a bit of planning to fit the thing in the frame."

"Early face test: It's OK, I suppose, but it doesn't actually look anything like it's supposed to. I wish I could draw on purpose."

"A journey of a thousand miles...: ...begins with a day return to Chipping Norton."

"The Golden Age Of Steam: A quick mock-up. To get everyone in focus, I had to take six separate shots of the carriage with different focus settings, then merge them all into one.

I don't know how I'm going to animate the steam yet." 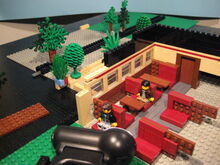 "Travelling in style: This is what I actually built for the train carriage interior. Pathetic, isn't it?" 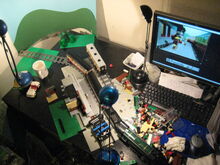 "Running out of space: And energy. And patience."

"A diabolical liberty: I'm breaking all the rules now. I'm a maverick. A loose cannon."

"Lego Darren is waiting: Today is the last day of the January Songs project, which means I have about 12 hours left to edit and add all the digital nonsense to this video.

It's going to be an interesting day."

"Face time: This is kind of what I do when I'm animating faces - I use a semi-transparent yellow layer and a layer with a grid layout to make sure the cylindrical head shape is the right size and alignment, then switch those bits off for the final render."
Add a photo to this gallery

Retrieved from "https://brickfilms.fandom.com/wiki/Darren_Hayman_-_My_Dream_Train?oldid=36666"
Community content is available under CC-BY-SA unless otherwise noted.