Changes (for 6 Music) is a 2010 music video brickfilm by Chris Salt.[1][2] It is set to a parody of the David Bowie song "Changes", created by radio DJ Adam Buxton and featuring comedic lyrics protesting the planned closure of BBC Radio 6 Music, presented as if being sung by David Bowie.[3][4] (The plan to close 6 Music was eventually dropped.) It was one of multiple brickfilms by Chris Salt featured as part of a BBC article about brickfilming in 2011. It is also referenced in the 2011 book The Complete David Bowie, written by Nicholas Pegg.[5]

Chris Salt was later requested by Adam Buxton to produce the brickfilm David Bowie - Cobbler Bob, which is also set to audio of Buxton impersonating Bowie.[6]

"Crowd mockup: An early test for the crowd shots with quick, hand-drawn faces in Photoshop. Blocking, working out how to comp the faces and signs."

"One out, all out: They're not happy about something. Yes, I plan to animate faces on all of them. I think I have a brain disease." 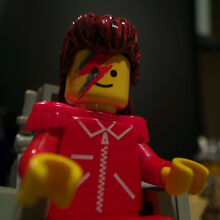 "Bowie Base One: Checking angles and stuff with a placeholder podium." 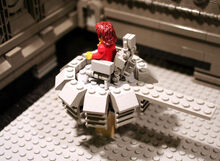 "Designing the podium: Trying to get an idea of shape and size."

"Control Room: Everything here apart from the podium and walkway was made by Pete Reid."

"Mystery object: Whatcha got there, space guy? Looks like some kind of gizmo or gewgaw.

Space guy isn't actually in this film. He's standing in for the secret protagonist who can't be revealed just yet. The mystery object is in the film though."

"Protest: Blocking again. That's a Lego front loader in the background. I had to replace the standard scoop with a massive thing in order for it to even show up. It was supposed to be an homage to the Ashes To Ashes video but you still can't really tell what it is. Ah well."

"Aggregating content and ringfencing brands: I reshot this bit because the whiteboard was too bricky. Used this to plan out how to do the text though (note the reflection). I also learned that the pointing stick was a really bad idea as it meant yet more frame-by-frame masking." 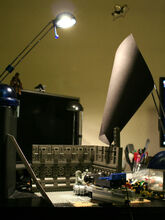 "Danger in the home: How many fire hazards can you spot in this simple lighting setup?" 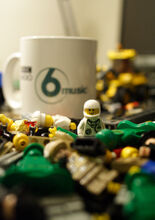 "Oh, the humanity: Space guy surveys the aftermath of another week-long animation session."

"First pass face composition: An early test. Already, I've made a number of rods for my own back here...

The zigzag on his face reaches his hairline, so I had to mask every frame to make sure it didn't overlap.

The hair casts a shadow on his face, so in this shot I'm using (I think) a hard light blending mode to let the shadow show through. A side effect of this is that it gives a yellow cast to everything, including his eyes and teeth."

"Getting there: A better face comp. I'm now using two separate compositions for his face (one for the face and one for the zigzag) and matching all the keyframes by hand. I bet there's an easier way, but I don't really know how to use my software properly.

Doing it this way means I can use different blending modes to keep the eyes and teeth white while still giving the impression that the hair shadow is falling on the zigzag. Best of both worlds, I guess.

I keep telling myself this is fun."

This is kind of a before-and-after thing. I use a solid yellow layer in the face composition to get the size and orientation about right, then switch it off and fine tune it before rendering.

If anyone wants to buy me a book on how to use AE properly, that would be awesome."

"The angry mob: The placards still need to be filled in but this is the finished crowd of 35 angry minifigs. I say "angry" - obviously they're mostly smiling here.

I'd done 12 of these by hand before I discovered you can copy and paste layers.

Update: This shot is 12 seconds long. With mouth animation and placard waving, it took 1 hour 34 minutes to render in After Effects. That's quite a long time."

"The ghost mob: And this is the kind of creepy view of all the faces on their own." 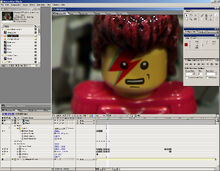 "A life on mars bar...: Another look at the fascinating world of post-production. Synching the Goblin King's mouth to the music."
Add a photo to this gallery

Retrieved from "https://brickfilms.fandom.com/wiki/Changes_(for_6_Music)?oldid=38048"
Community content is available under CC-BY-SA unless otherwise noted.