Brickfilms Wiki
Register
Don't have an account?
Sign In
Advertisement
in: Brickfilms directed by Chris Salt, 2007 brickfilms, Brickfilms without dialogue,
and 9 more

Justin Sandercoe's "The Most Innovative Use Of A Guitar" competition

Bowling for Sandercoe is a 2007 brickfilm by Chris Salt.[1][2] It is about a two men who run into a technical issue while attempting to play bowling.[3] It was created for online guitar teacher Justin Sandercoe's "The Most Innovative Use Of A Guitar" video competition, and won the grand prize.[4][5]

Two men, Walter and Donnie, are playing a round at a bowling alley. Walter throws the ball, but the LEGO studs along the lane prevent the ball from rolling far enough to reach the pins. Walter returns to Donnie to see that no points have been scored, and explains that they will need a flat surface for a successful game, before storming off. Donnie notices a poster on the wall advertising Justin Sandercoe's online guitar lessons, which gives him an idea.

The two men begin another game of bowling, but this time a flat surface allows the ball to travel smoothly and knock down all the pins. It is revealed that they are bowling along the the body of a guitar.[3] 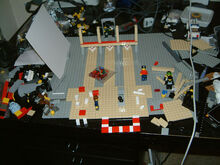 "Early building work on the lanes" 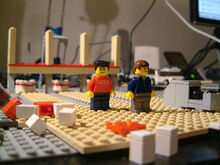 "“Costume” tests - digital cameras and camcorders really have a problem with LEGO reds. They bleed like crazy, so I had to abandon this outfit." 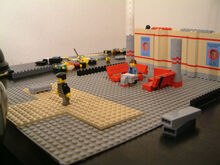 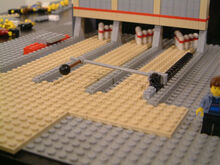 "First attempt at the bouncing ball - this is the mechanism I used for the bouncing ball shot that you can see in the trailer. It was really difficult to get the precise movements I wanted though, so I ended up using the one you see in the “masking and bowling” video." 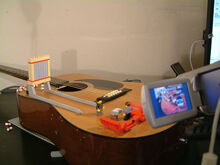 "The guitar set-up - I somehow managed to arrange this so that the camera was between me and the things I needed to move for the shot. There was no other way to do it though, so for each frame I had to get up and carefully inch around the camera to avoid moving it at all, move Walter just a tiny little bit, then inch back to the mouse to capture the frame. It’s a glamourous life."