Batman: Out of Character

Batman: Out of Character

Batman: Out of Character is a 2011 comedy brickfilm by Kris Theorin and Kurtis Theorin.[1][2] It follows two friends playing with Batman action figures, who disagree on the characterization of Batman.[3] It was created for the LEGO Super Heroes Challenge, and was one of two first place winners in the November bracket, along with Batman's Day Off by Paul Hollingsworth.[4] It was also chosen as part of the official selections of the FirstGlance Film Festival Philadelphia, the Seedlings Festival, and the National Film Festival for Talented Youth (NFFTY). 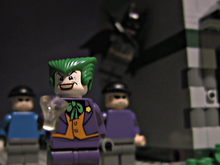 "Yep, this time I'm doing batman! This isn't actually a scene from the movie but it is something similar to what it will be." 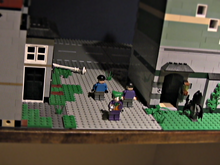 "This is a quick alley set I put together for my next film. Half the film will take place here." 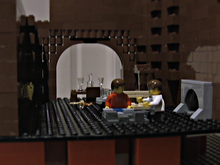 "This is the second set in my next film. The other half of the movie will take place here. This is also the set I used for my previous movie, Scroober Drew 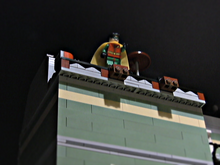 "He actually won't be in the film for the most part."

"Just started the first part of my new batman film. I already animated all the talking scenes over the weekend. It'll be a big rush to get all this done in time."

"Now its time to add the effects and color correction to the movie!"

"This is just one quick scene that I decided to render to place at the beginning of the film."