Alone is a 2002 horror brickfilm by Jason Rowoldt.[1] It follows the story of man who wakes up in an empty chamber, alone.[2] It was an entry to the ShootinBricks.com Horror Animation Contest and was nominated for Best Visual Effects.[3]

The man is now in a black room. A hooded figure kneels nearby. The man reaches out to the figure, and the figure turns around. The figure is death. The man tries to escape, but Death follows.[2] 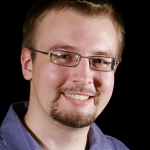